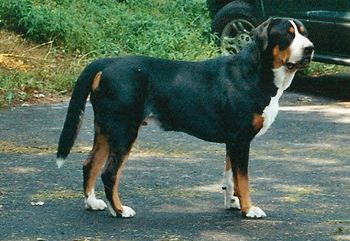 SIR RAVEN OF BARTON MANOR Raven (the big guy) is our, 9 year old, recently retired male. Since his retirement he has keep himself occupied with 3 major pursuits. First walking around with all the puppies following him with looks of admiration on their faces (much to his chagrin). Second, being a typical male. he tells all the females what to do. The females, being typical female, don’t listen any way. The picture shows him impatiently waiting for the Third pursuit. “Put down the camera and get into the car so we can go places, see thing, and have people tell me how handsome I am while petting me”. 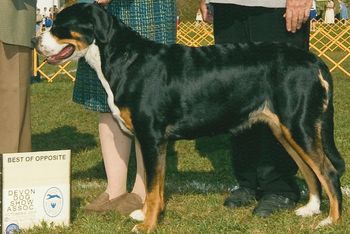 CH. CABRO DOS SUDNLY JUSTA JEWEL WS08974606 bred by Carol Gehart and Dan Campeau This is our 3 year old girl. She is due to be bred in mid April. The puppies will be due mid June. They will be ready to move to new homes in mid August 2008. She was shown a few times in the Puppy class (taking a Best of Winners and a Best of Opposite). She was then rested until She turned 2 yrs. of age. She won 5 times stright in shows she was entered (Winners Females once-Best of Winners 4 time-and added 2 more Best of Opposite) to finish her championship. This will be her first litter. She is being breed to a very nice, large boned male Swiss Import (CH. NORMADE VON STUDERSVILEN). This should be an excellent breeding producing sound well tempered puppies. Pedigree E-mailed upon request. 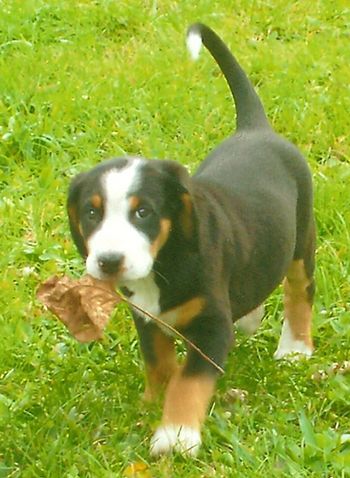 SWISS RUN’S SUDNLY KISMET RENDEZVOUS (Honey) She is a very nice well put togeather girl. She was bred by Deena Never And Dan Campeau. Her mother CH SUDDANLY SWISS RUN’S PRIDE is a nice female with an excellent show career to her credit. Her father CH FALLEN OAK ARAPAHOE BRUNO has many Best of Breeds,Speciality show wins, and Group Wins and Placements to his credit. He has been in the top 5 listing for Greater Swiss Mountain Dogs for a couple of years (2004 - 2006). He is the current number one GSMD in the country for 2007. Both Sire and Dam are still bing shown. Honey is currently in roled in Comformation classes. She was shown in 2 AKC B Match Show. She won the Puppy 3 to 6 Month Class and went on to win Best GSMD Puppy In match. She won best puppy 6 to 12 mo. and went Best of Breed. A good start. Watch for her in AKC A matches in a few Months. 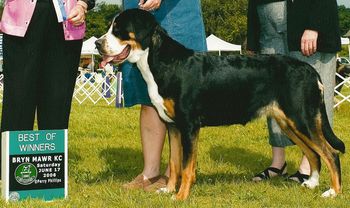 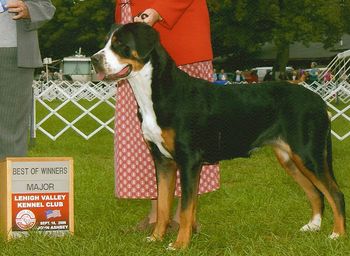 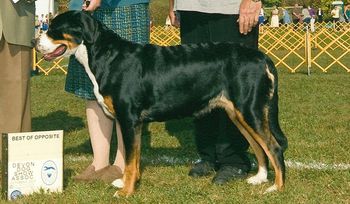 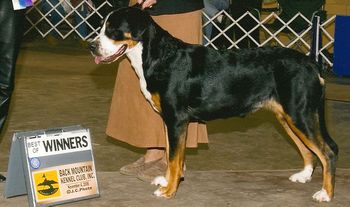 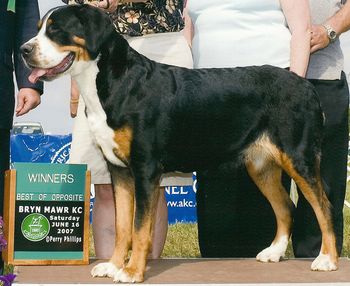 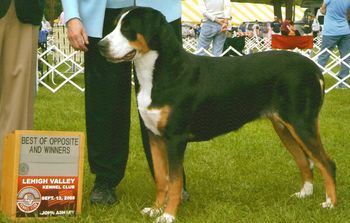 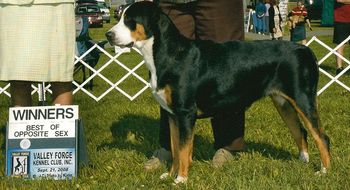 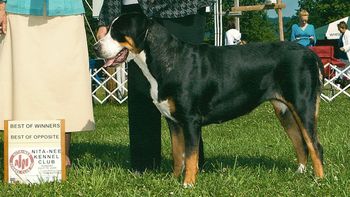